I study how the brain combines different types of information to make decisions. I develop models that explain the computations that support decision making and design behavioral experiments to validate model predictions. I test how the brain could implement those computations by recording from large populations of neurons and use machine-learning algorithms to visualize neural states and predict upcoming choices.

I developed neural computational models of decision making for my PhD thesis. My models use neural time-series data recorded from macaque monkeys making visual decisions as input to shallow artificial neural networks. The models predict the monkey’s choices and response times and reproduce the dynamics of actual neural populations. You can find an overview the modeling framework and sample code in the gated_accumulator_model repository or read more about the details in the papers listed below. 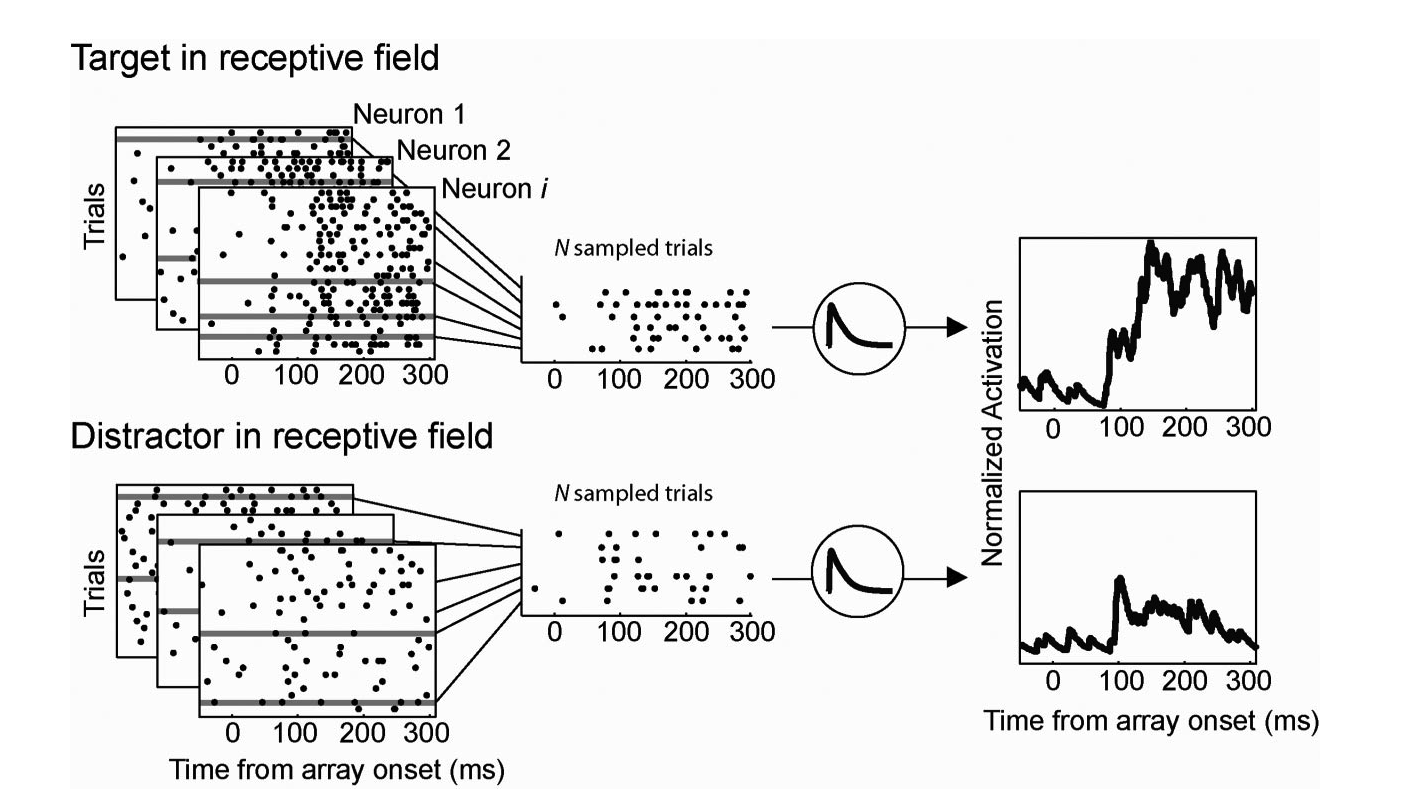 I combined human psychophysical experiments, computational models of behavior, and neurophysiological recordings from behaving macaque monkeys to understand how we adapt our decision strategies following mistakes. I fit models of choice and reaction time to human and monkey behavior and optimized model parameters to make inferences about the underlying neural mechanisms. To test the model predictions, I analyzed neural dynamics recorded from the parietal cortex of monkeys performing a perceptual decision-making task. The neural data matched the model predictions and showed that although our visual sensitivity drops following errors, our brain can compensate by adaptively slowing down the subsequent choice. You can read more about it in the following paper or check out some of the popular press on the article by following the links below.

Figure 2. Decision errors slow us down (Left). We found that neural activity in parietal cortex also changes (Middle). Our computational modeling explains why this happens (Right). Check out Purcell & Kiani (2016) for more details.

I developed a new computational model to understand flexible decision making in a dynamic environment. In a changing environment, we must decide whether errors result from poor choices or a change in the environment. The Bayes optimal solution is to treat negative outcomes as evidence for a change of environment and to weight that evidence by the confidence in our choice. I developed a model that showed how humans could approximate the optimal solution using very simple computations and developed a psychophysics experiment to test the model predictions. I showed that the model accurately predicts human choices and quantitatively outperforms plausible alternatives.

I use state-of-the-art electrophysiology technology to simultaneously record activity from hundreds of neurons in multiple areas of the primate brain. I record neural activity while monkeys make decisions based on visual information. I use dimensionality reduction methods to visualize the evolution of neural states during decision formation. I use linear classifiers to decode the information represented in different brain region and to predict the upcoming choices. I study the correlation structure of signals within and across areas to to understand neural interactions. My results from this project will be presented at the Society for Neuroscience Annual Meeting this fall.

Figure 4. (Left) I used unsupervised dimensionality reduction techniques (Yu et al., 2009) to visualize the evolution of neural states over time. The network evolves to signal the upcoming choice, and the signal is stronger for easier decisions. (Right) A linear classifier trained on 20 dimensions can decode the upcoming choice with >95% accuracy (cross-validated).

I collaborated with Goeff Woodman to conduct two studies of electroencephalogram (EEG) recordings - brain activity recorded from the surface of the head that can be used to index cognitive states. My work helped to establish a non-human primate model of EEG components associated with visual attention and working memory. By pairing EEG from outside the skull with recordings of neural activity from inside the brain, we could study how neural activity gives rise to observed EEG. We showed how frontal cortex indirectly contributes to the generation of attention and memory related EEG signals. You can read more about this work in the papers below or check out Geoff’s website for more information about his awesome work. 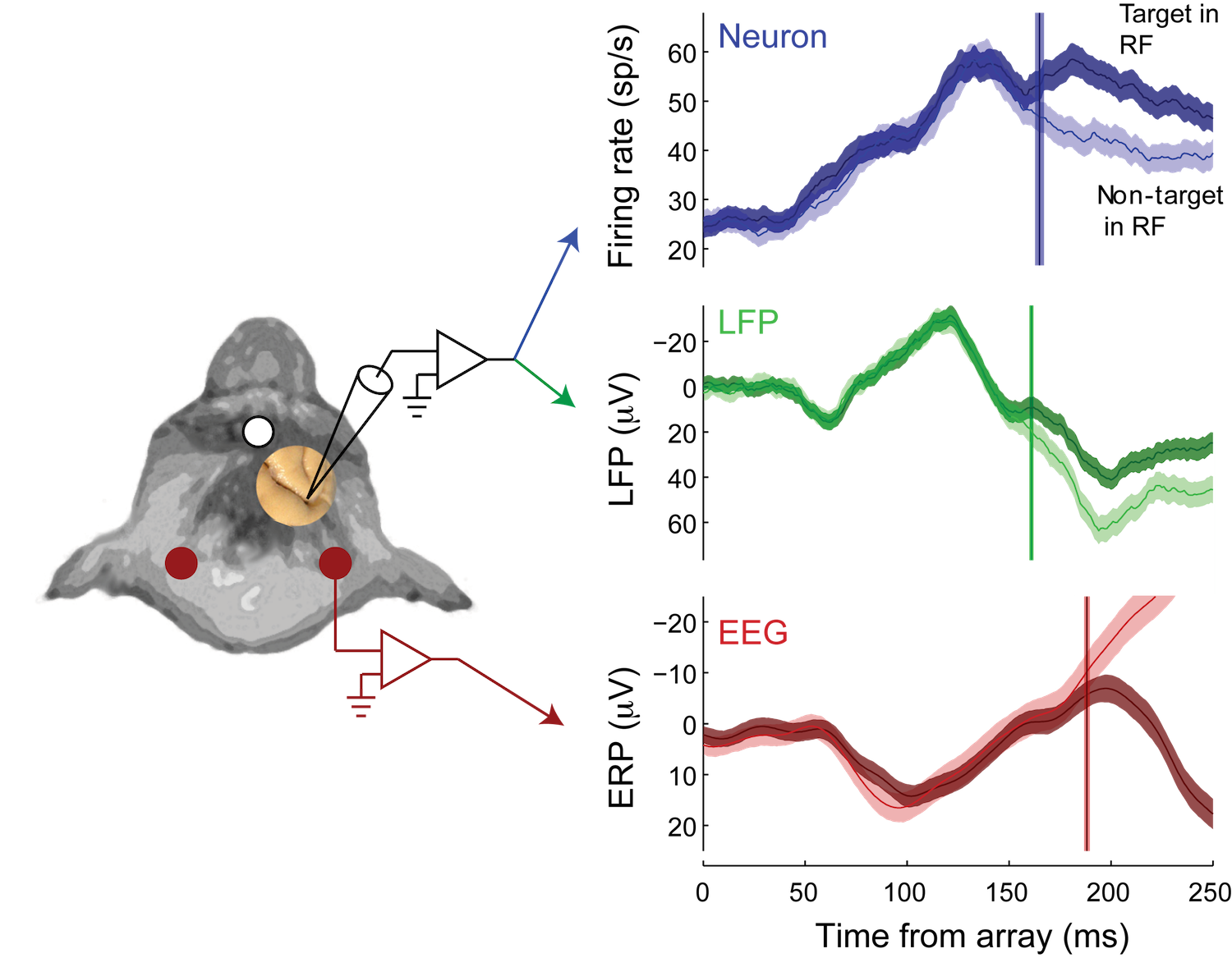 As an undergraduate, I evaluated methods for visualizing the structure of human categorization of colors and personality traits. I collected human similarity judgments of color and personality trait stimuli using a “sort-and-merge” procedure in which subjects grouped stimuli into clusters based on their perceived similarity and subsequently merged the clusters based their overall group similarity. I visualized the resulting similarity structure using an multidimensional scaling (MDS) procedrue. I assessed the internal validity of the procedure using percent variance explained and the external validity of the procedure by comparing the shape of the solution to a “ground truth” dataset obtained using pairwise similarity judgments. I found that the sort-and-merge procedure could capture the structure of judgments quite well, establishing it as a cheaper and less time-consuming alternative to pairwise judgments for measuring human categorization. 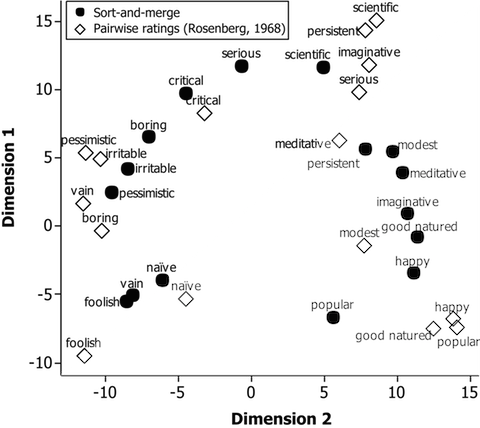